Attention risk of confusion: A cold or influenza?

They can easily attack you, especially during the colder months: pathogens leading to a sore throat, coughs, sniffles and other irritating symptoms. However, the exact cause can be easily confused: Is it a cold or influenza?

When we speak of “the flu” we usually mean a cold. The infection is expressed as a slight to moderate feeling of illness and usually begins with a raw or slightly sore throat. As the cold progresses, these symptoms are accompanied by a headache and aching limbs, fatigue, exhaustion, a stuffy nose and ultimately a cough. A slight fever may also occur, but usually only for a short period.

In the so-called “real” influenza, the symptoms are similar, but much more sudden and severe. In addition to a sore throat, cough, headache and aching limbs, as well as significantly increased fatigue, weakness and exhaustion, those affected usually suffer from high fever (at least 38°C), which usually lasts longer than three days. Influenza can also affect the digestive tract, resulting in nausea, vomiting or diarrhoea.

Good to know: Although influenza and colds differ in the severity of their symptoms, they can be clearly distinguished by the responsible pathogens: Influenza is triggered by influenza viruses1 of types A or B, whereas colds can be triggered by more than 200 different types of viruses, e.g. rhinoviruses.

Once we have caught these pathogens, most of us want to know: How do I get rid of my cold as quickly as possible? Obviously, the same also applies to the “real” flu.

The treatment is primarily symptomatic and depends on the symptoms. For a mucous cough during a cold, expectorants (e.g. Bromuc® akut Hustenlöser) can help to relieve the cough and liquefy stubborn mucus. For those affected by a stuffy nose, nasal sprays (such as Rhinex® Nasenspray) can support decongestion of the nasal mucous membranes and drainage of stubborn secretions. Inhalations with essential oils (e.g. Sanopinwern® Inhalat), which can help to dissolve viscous mucus in respiratory tract infections, have also proven their worth. In the presence of digestive complaints, remedies for nausea and vomiting (e.g. Emesan®) and diarrhoea (e.g. Loperamid akut Aristo®) can help to alleviate them. In addition, pain-relieving and antipyretic medication (e.g. Azur® Tabletten) can help relieve headaches and aching limbs and reduce fever.

For both a cold and the flu, it is important to rest, drink a lot of fluids and prevent the possible spread of the pathogens, for example by regularly washing your hands and airing the room, in addition to alleviating the symptoms. In the event of worsening symptoms, e.g. a rapidly rising fever, a doctor should be contacted in good time.2

END_OF_DOCUMENT_TOKEN_TO_BE_REPLACED 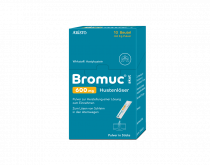 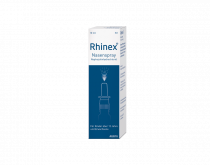 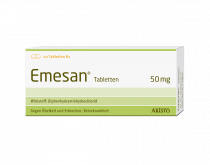 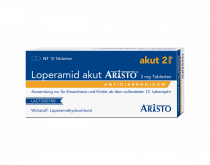 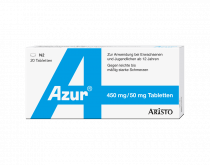 Diabetes, back pain, depression – widespread diseases of our time. You can find information about symptoms, causes, and treatment with medication here.